Update: I presented the content of this blog post at a Pydata meetup in Amsterdam. Other then adding a section on community detection, the presentation more or less follows this post. The slides can be found here.

Recently, the The International Consortium of Investigative Journalists (ICIJ) released a dump of some of the information they received as part of the panama papers leak.

The data released is in the form of a network: a collection of nodes which relate to entities, addresses, officers and intermediaries and a collection of edges which give information about the relationships between these nodes. For a full description of where the data comes from and what the fields mean see data/codebook.pdf in the repository for this notebook.

A lot has been said about what is in the Panama Papers. Most of this has been focused around individuals who choose to use the business structures detailed in the leaks. In this post, I take a different look at the data, focusing on the structures that are implied by the Panama Papers, and on how we might be able to use ideas and tools from graph theory to explore these structures.

My reason for this approach is that the current leak contains over 800,000 nodes and over 1.1 million relationships. Spending a minute looking at each relationship would take over two years, so automation is the only way to begin to explore a dataset of this size. Automation however does have it’s limitations - I am not an accountant or business lawyer, and I can’t begin to speculate on the usefulness or even the interestingness of these results. My guess would be that this approach would need to be combined with both domain specific knowledge and local expertise on the people involved to get the most out of it.

This post is written as a jupyter notebook. This should allow anyone to reproduce my results. You can find the repository for this notebook here. Along with the analysis carried out in this notebook, I use a number of short, home build functions. These are also included in the repository.

Disclaimer: While I discuss several of the entities I find in the data, I am not accusing anyone of breaking the law.

To begin with, I am going to load the nodes and edges into memory using pandas, normalising the names as I go:

I am treating the graph as directed, as the relationships implied by the edges are directional (e.g. “shareholder of” or “director of”), however for part of the analysis we will switch to an undirected form.

The first thing we are going to want to do is merge similar names into the same node:

I was not able to merge - advice elswehere

One of the first questions we can ask about the network is whether it is connected. Two nodes are considered connected if there is a path between the nodes. Networkx allows us to do this directly by splitting the graph into connected sub-graphs:

It looks like the majority of nodes are all connected into one large connected graph, which contains nearly 90% of all the nodes. We will look at this graph soon, but to get a feeling for what information is contained within these graphs, let’s plot a few of the smaller ones: 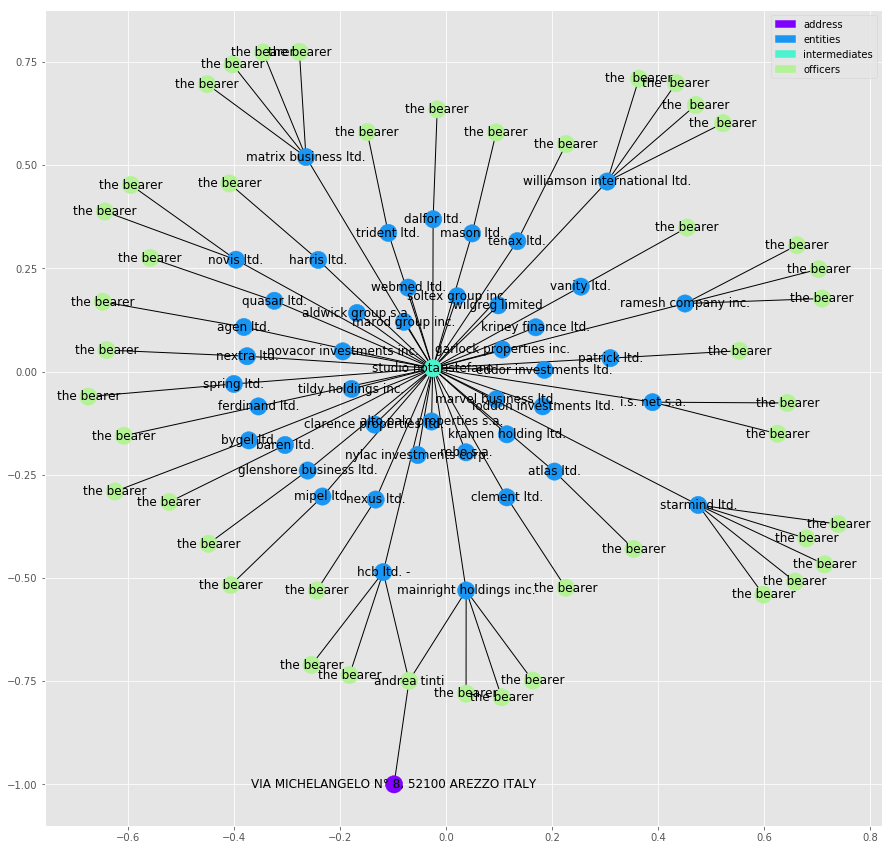 In this graph we are seeing one intermediate “studia notanstefando”, acting as the intermediate for a number of entities, in this case what look like companies. You can also tell how crowded the graph is becoming. We are going to see this problem just gets worse as graph sizes grow and at some point the data becomes impossible to visualise in a concise manner.

Let us take a look at a more complex example: 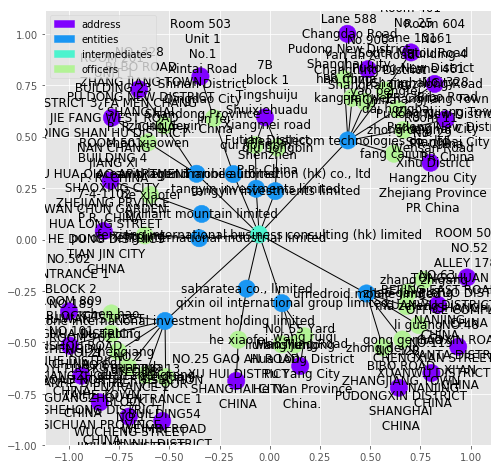 Turning our attention to that largest connected sub-graph, we run into problems. The graph is far too big to consider plotting it and analysing it meaningfully by eye. Instead we need to try and phase our questions in such a way that the computer does the work for us.

From the graphs we saw above, it looks like the intermediaries tend to sit at the centre of things. Does this hold true in the large graph? To test this, we can find the average degree of each node type, where “degree” is the number of edges connected to a node.

We can see that the median values of each group aren’t that different - 50% of most nodes have only a few edges connected to them. However the large mean of the degree of intermediates suggests that the distribution is highly uneven and long tailed where there are a small number intermediaries who have a large number of the edges.

Given that the Intermediary appears to be a middleman that helps create the entities, it is easy to consider that each one could be linked to many entities. What isn’t immediately clear is how they might be linked together. Let’s take a look at the shortest path between “mossack fonseca & co” and “prime corporate solutions sarl”: 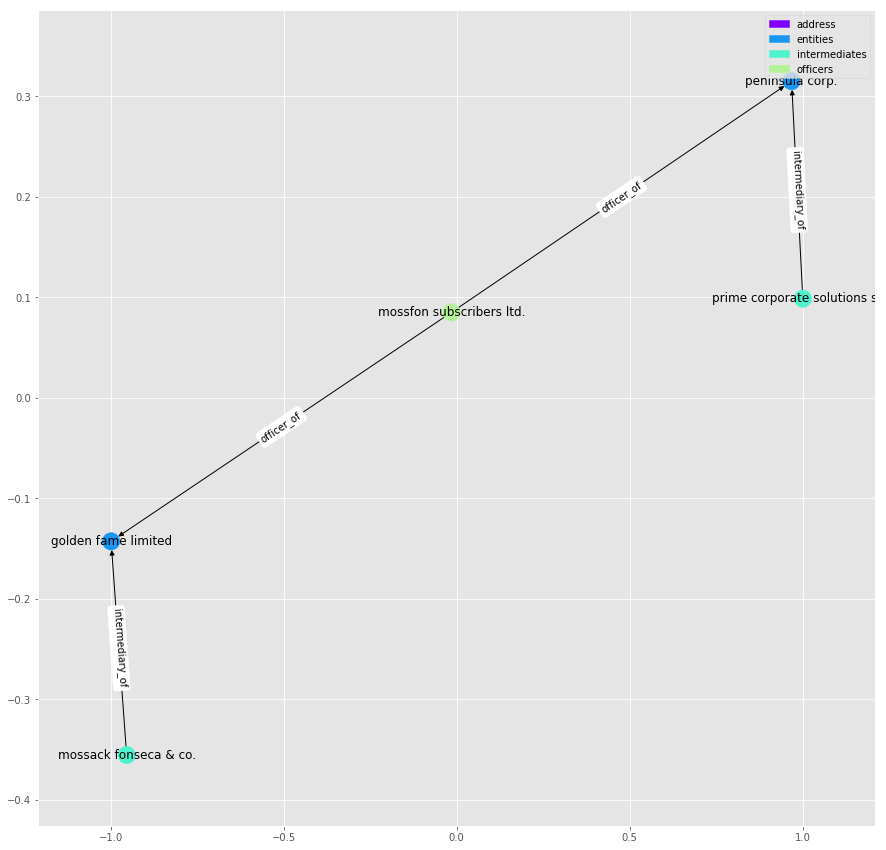 It seems that the two intermediaries are linked together through companies who share a common director, [“mossfon subscribers ltd.”]. As it’s name suggests, it also acts as director for a number of other companies: 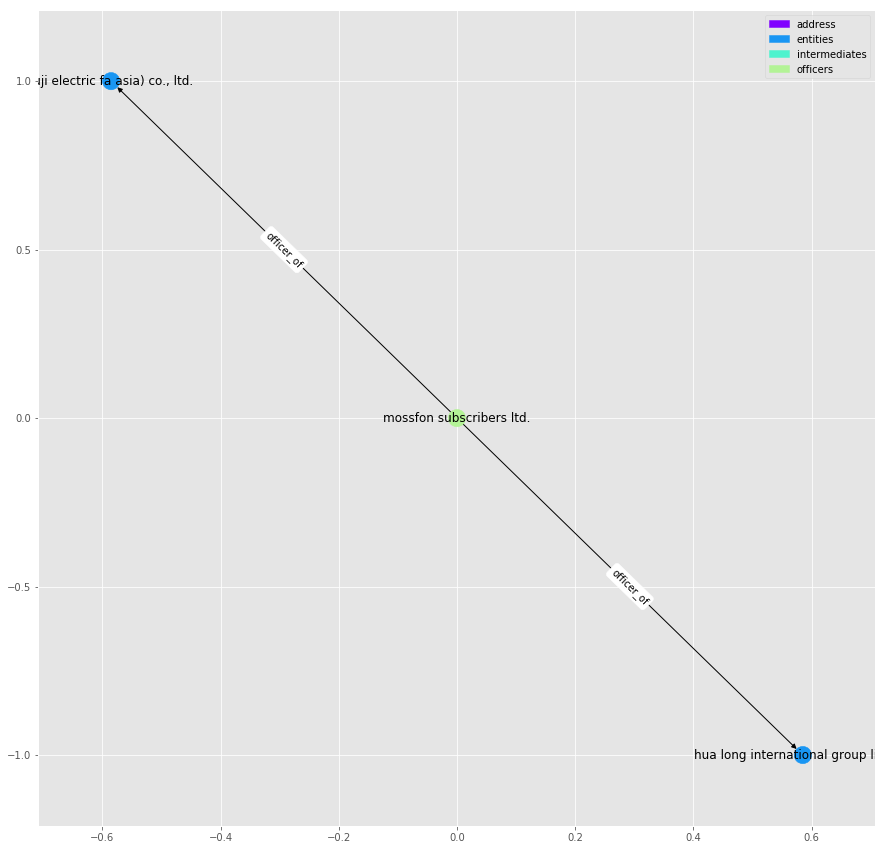 We can do the same for, say, “mossack fonseca & co.” and “sealight incorporations limited”: 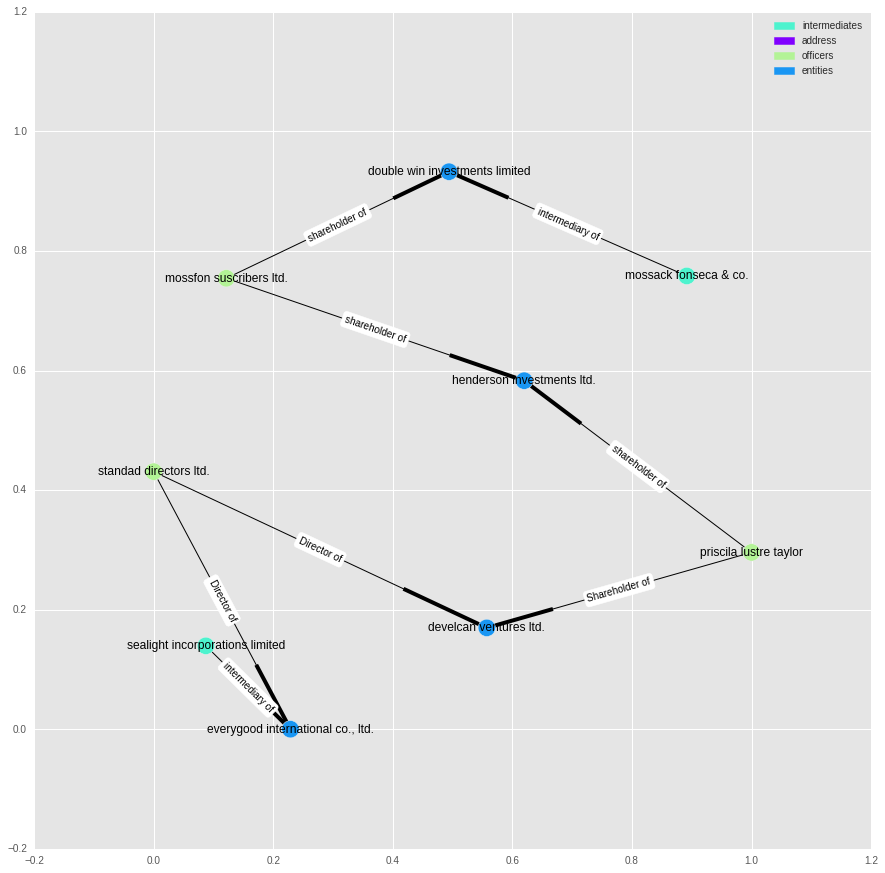 This chain is more convoluted, but it looks like a series of companies tied together by common shareholders or directors.

We can also ask how the degree of the graph is distributed. 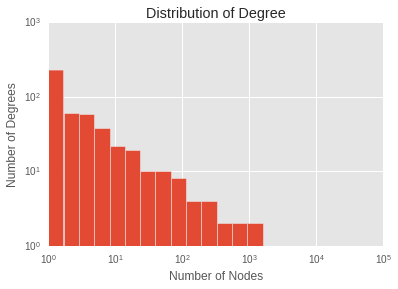 If we squint, it might look like a power law distribution, giving a scale free graph. But we’d have to be squinting.

The main result is that the distribution is long tailed - a small number of nodes are involved in most of the links.

We are starting to explore how entities are connected together. Intuitively, you might expect nodes with a high degree to be the most “important” - that they sit at the centre of the graph and are closely linked to every other node. However, other measures exist.

A common measure for importance of a node is its page rank. Page rank is one of the measures used by google to determine the importance of a webpage, and is named after Larry Page. Essentially, if we were to perform a random walk through a graph, jumping to a random page every now and then, the time spent on each node is proportional to its page-rank.

We can calculate the page rank for each node below, and look at the top ranked nodes:

As it turns out, page rank picks out similar nodes to looking at degree.

If I were interested in identifying the main players in setting up offshore companies, these are the intermediates that I would start looking at first.

So what happens if we look at the page rank, but just for entities? 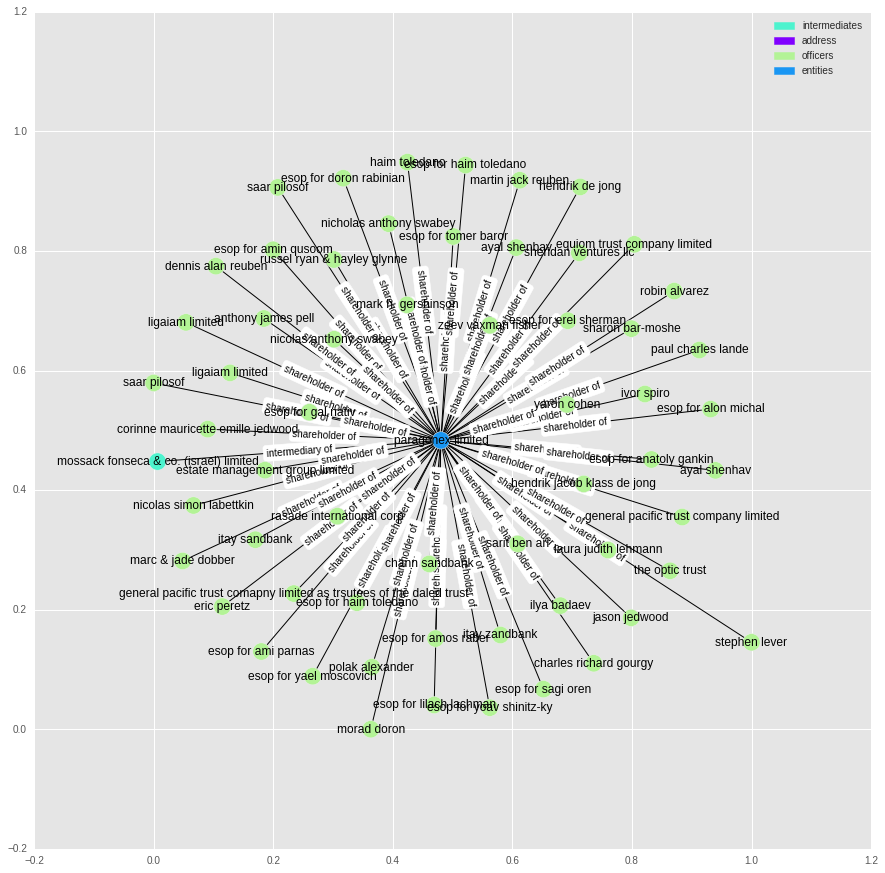 It looks like we just end up with the entities that have lots of shareholders and who use one of the high ranking intermediates.

Another measurement we can make of the “shape” of a graph is its clustering coefficient. For each node, this measures how connected its neighbours are with each other. You can think of it as a measure of the local structure of the graph: what fraction of a nodes neighbours are also neighbours of each other. 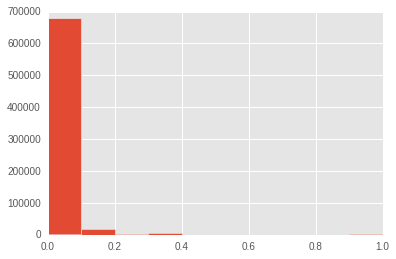 As it turns out, there isn’t much structure. Most nodes have clustering coefficients of zero. The few that have non-zero values tend to have low degrees. This means that the panama paper network isn’t an example of a small world network. To see what’s happening in the few non-zero cases, we can look at an example sub-graph below: 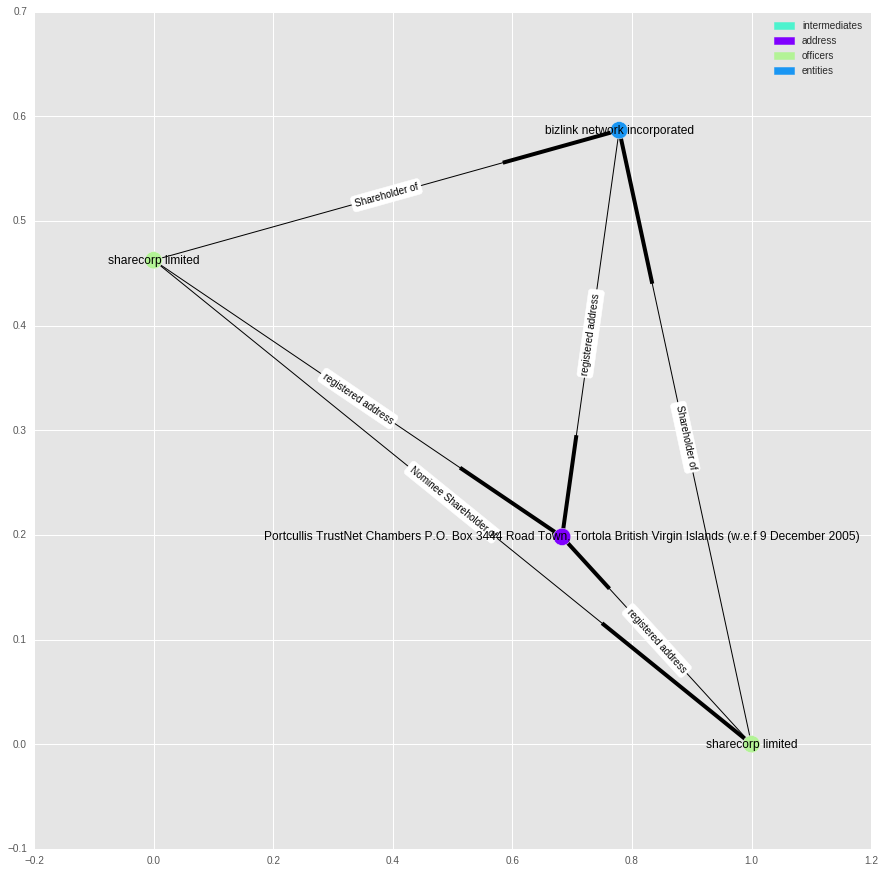 In this case, it looks like it is just due to a shared address between “sharecorp limited” and “bizlink network incorporated”, and some confusion over the multiple occurrences of “sharecorp”.

As a side note, I’m curious how these businesses come up with their names - I don’t know anything about sharecorp limited, but it sounds like a name used as an example in economics textbooks.

So far we have looked at the fully connected graph, even with connections like “address of” and “intermediary of”. While this does tell us that there has been nearly 40,000 businesses registered to a single address, we might want to confine ourselves to just looking at the network formed where there is some form of ownership.

Unlike our previous graph, we are going to make this one directed - this mean that each edge has a direction associated with it. For example the relationship “shareholder of” acts in one direction.

I’ve collected together all the relationships I think involve some kind of ownership, but I am not a lawyer or accountant, so these may be wrong.

Removing two thirds of the nodes breaks this graph into lots of smaller sub-graphs. Most of these graphs are uninteresting and simply reflect that one company is owned by a large number of shareholders. Consider the graph below:

(Note: we are now looking at a “directed” graph. The edges are slightly wider at one end to represent their directionality) 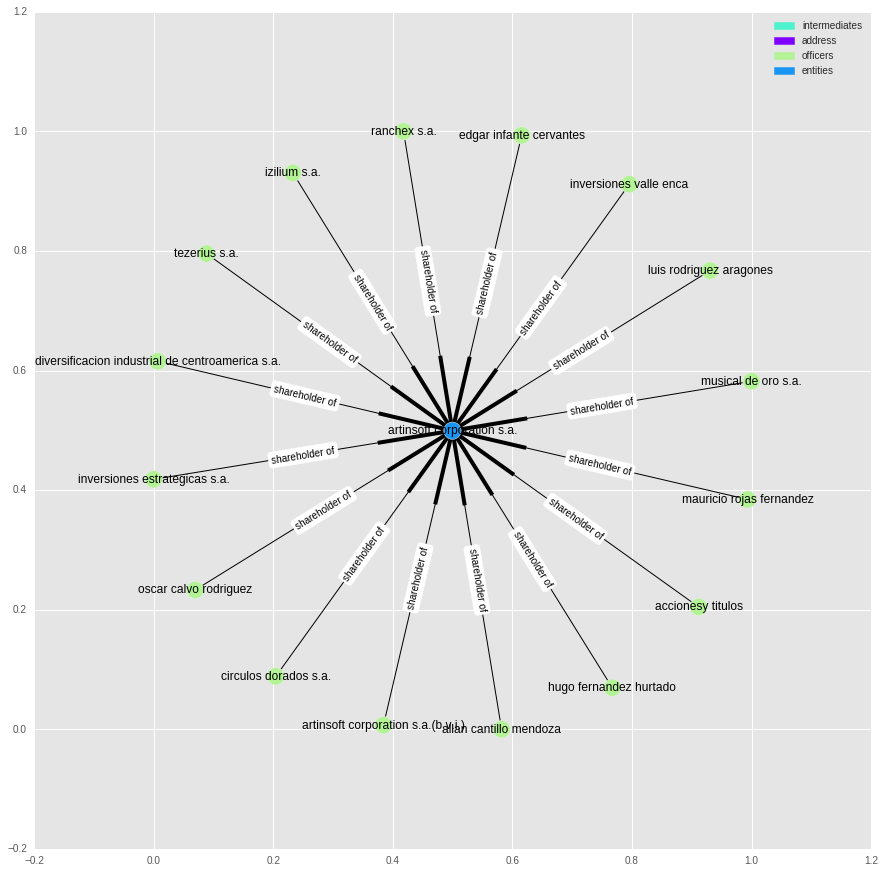 To identify more interesting structures, we can look at sub-graphs with the largest median node degree: 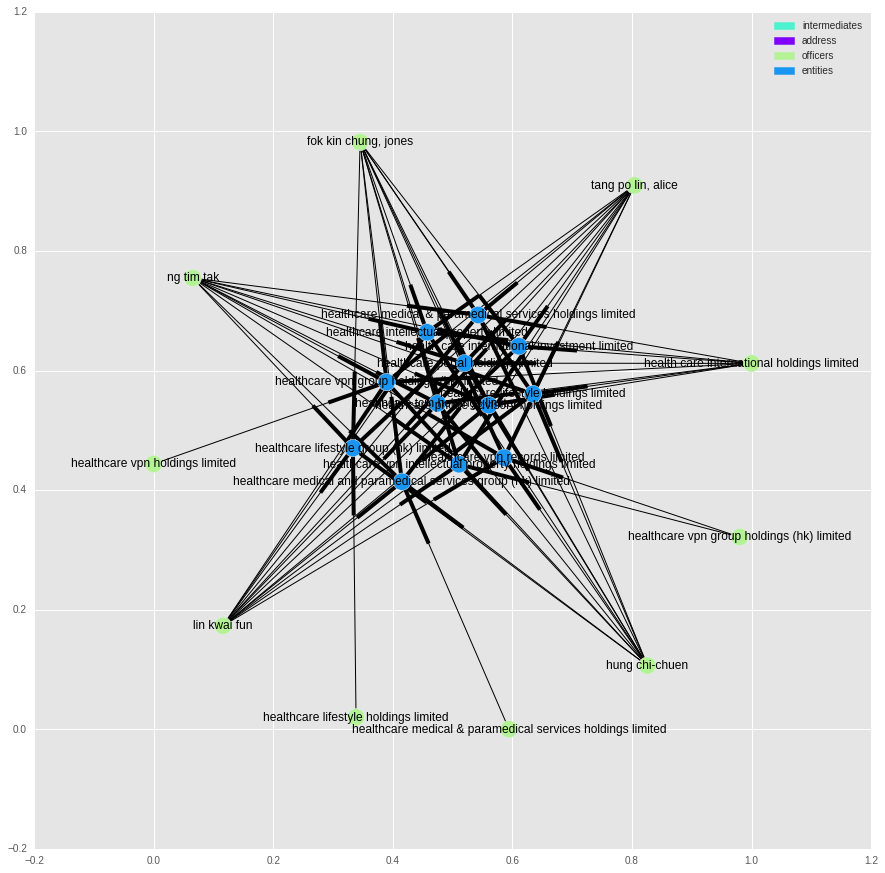 In these cases we are looking at a small group of companies that share the same owners.

We can also ask what the longest chain of ownership links is: 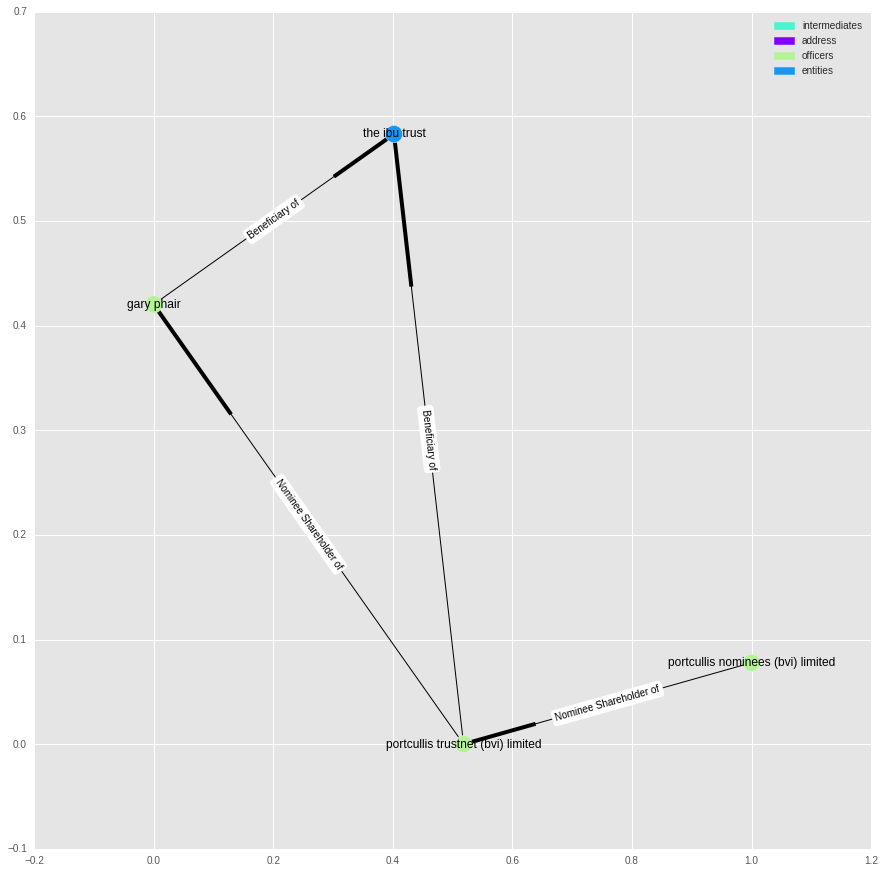 It is surprisingly short.

And with that, I have finished my explorations.

I’d like to reiterate that without prior knowledge of this sort of network, it is hard to know what constitutes an “interesting” business/entities structure, or what might be the sign of potentially criminal/immoral behaviour. My guess is that no single measure captures it completely, but rather we could combine multiple measures, and some machine learning to automatically identify those areas for future inquiry. In fact, I’d be surprised if this wasn’t already being done somewhere.

That’s about all I have to say for now on this network. I’m sure there is more that can be done, and interesting questions that can be asked and answered, but I lack the background required to know where to start. If this is something you are interested in and have some ideas about where to go, please get in touch.

How it was Made

This post was created as a jupyter notebook. You can find the notebook, the data and code used to create it here.