This project will assure you have mastered the subjects covered in the statistics lessons. The hope is to have this project be as comprehensive of these topics as possible. Good luck!

A/B tests are very commonly performed by data analysts and data scientists. It is important that you get some practice working with the difficulties of these

For this project, you will be working to understand the results of an A/B test run by an e-commerce website. Your goal is to work through this notebook to help the company understand if they should implement the new page, keep the old page, or perhaps run the experiment longer to make their decision.

Question 1. Now, read in the ab_data.csv data. Store it in df. Use your dataframe to answer the questions in Quiz 1 of the classroom.

a. Read in the dataset and take a look at the top few rows here:

b. Use the below cell to find the number of rows in the dataset.

c.Number of unique users in the dataset.

d. The proportion of users converted.

e. The number of times the new_page and treatment don’t line up.

f. Do any rows have missing values?

Question 2. For the rows where treatment is not aligned with new_page or control is not aligned with old_page, we cannot be sure if this row truly received the new or old page. Use Quiz 2 in the classroom to provide how we should handle these rows. As a result you can just remove the incremenating rows.

a. How many unique user_ids are in df2?

b. There is one user_id repeated in df2. What is it?

c. What is the row information for the repeat user_id?

d. Remove one of the rows with a duplicate user_id, keep dataframe as df2

a. What is the probability of an individual converting regardless of the page they receive?

b. Given that an individual was in the control group, what is the probability they converted?

c. Given that an individual was in the treatment group, what is the probability they converted?

d. What is the probability that an individual received the new page?

e. Use the results in the previous two portions of this question to suggest if you think there is evidence that one page leads to more conversions? Write your response below.

Question 1. For now, consider you need to make the decision just based on all the data provided. If you want to assume that the old page is better unless the new page proves to be definitely better at a Type I error rate of 5%, what should your null and alternative hypotheses be? You can state your hypothesis in terms of words or in terms of $p_{old}$ and $p_{new}$, which are the converted rates for the old and new pages.

Use a sample size for each page equal to the ones in ab_data.csv.

Perform the sampling distribution for the difference in converted between the two pages over 10,000 iterations of calculating an estimate from the null.

Given the assumption in the question, $p_{new} = p_{old}$. Hence, we should calculate the average of the real $p_{new}$ and $p_{old}$ (probability of conversion given new page and old page respectively) to calculate $p_{mean}$.

b. What is the convert rate for $p_{old}$ under the null?

i. Plot a histogram of the p_diffs. Does this plot look like what you expected? Use the matching problem in the classroom to assure you fully understand what was computed here. 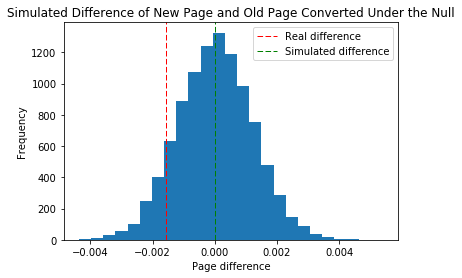 j. What proportion of the p_diffs are greater than the actual difference observed in ab_data.csv?

The above number makes sense because the probability for a conversion of a new page is lower than both the mean and old page conversion rates.

k. In words, explain what you just computed in part j.. What is this value called in scientific studies? What does this value mean in terms of whether or not there is a difference between the new and old pages?

If our sample conformed to the null hypothesis then we’d expect the proportion greater than the actual difference to be 0.5. However, we calculate that almost 90% of the population in our simulated sample lies above the real difference which does not only suggest that the new page does not do significantly better than the old page, it might even be worse!

The value calculated above is the p-value.

l. We could also use a built-in to achieve similar results. Though using the built-in might be easier to code, the above portions are a walkthrough of the ideas that are critical to correctly thinking about statistical significance. Fill in the below to calculate the number of conversions for each page, as well as the number of individuals who received each page. Let n_old and n_new refer the the number of rows associated with the old page and new pages, respectively.

m. Now use stats.proportions_ztest to compute your test statistic and p-value. Here is a helpful link on using the built in.

n. What do the z-score and p-value you computed in the previous question mean for the conversion rates of the old and new pages? Do they agree with the findings in parts j. and k.?

Given the above definition, it would seem that the differences between the lines shown in the histogram above is -1.31 standard deviations. The p-value is roughly 19.0% which is the probability that this result is due to random chance, this is not enough evidence to reject the null hypothesis and thus we fail to do so.

1. In this final part, you will see that the result you acheived in the previous A/B test can also be acheived by performing regression.

a. Since each row is either a conversion or no conversion, what type of regression should you be performing in this case?

You can use a logistic regression.

This will likely be the sm module to use.

b. The goal is to use statsmodels to fit the regression model you specified in part a. to see if there is a significant difference in conversion based on which page a customer receives. However, you first need to create a column for the intercept, and create a dummy variable column for which page each user received. Add an intercept column, as well as an ab_page column, which is 1 when an individual receives the treatment and 0 if control.

c. Use statsmodels to import your regression model. Instantiate the model, and fit the model using the two columns you created in part b. to predict whether or not an individual converts.

d. Provide the summary of your model below, and use it as necessary to answer the following questions.

e. What is the p-value associated with ab_page? Why does it differ from the value you found in the Part II?

Apparently the p-value associated with ab_page is 0.1899, which is slightly lower than the p-value I calculated using the z-test above. The reason why the value is lower is because I added an intercept which is meant to account for bias. This means that this value is more accurate. (As in, it’s probably closer to the true p-value)

However, this p-value is still much too high to reject the null hypothesis.

There are certainly disadvantages to adding too many features into your analysis. When do you regression or categorization analysis you want to have features which have large impacts on outcome, small impacts are usually not influencial and should be left for the intercept.

I believe there’s a statistic which accounts for this, some sort of corrected R² value (in linear regression at least) which will give lower outputs if “useless” features are added.

However, only one feature was chosen to determine whether a user would convert (beside the intercept) so a couple of added features wouldn’t hurt. I would imagine some features like the time spent looking at page and the date the page was designed might be some interesting features to add. The longer a customer spends on a page the more they are likely to be content with it and unwilling to change, it could also be the case that really old pages will not work well and people will want an updated version.

g. Now along with testing if the conversion rate changes for different pages, also add an effect based on which country a user lives. You will need to read in the countries.csv dataset and merge together your datasets on the approporiate rows. Here are the docs for joining tables.

Does it appear that country had an impact on conversion? Don’t forget to create dummy variables for these country columns - Hint: You will need two columns for the three dummy varaibles. Provide the statistical output as well as a written response to answer this question.

It seems that country did have some bearing on conversion rate, but not high enough to be satistically significant

h. Though you have now looked at the individual factors of country and page on conversion, we would now like to look at an interaction between page and country to see if there are significant effects on conversion. Create the necessary additional columns, and fit the new model.

Provide the summary results, and your conclusions based on the results.

When adding everything together it seems that the p-values for all featues has increased. The z-score for the intercept is incredibly large though which is interesting.

Although it would seem from the outset that there is a difference between the conversion rates of new and old pages, there is just not enough evidence to reject the null hypothesis. From the histogram shown in this report, it seems that the new page does worse than the old pa.

It was also found that this was not dependent on countries with conversion rates being roughly the same in the UK as in the US. The test conditions were fairly good as well, users had a roughly 50% chance to recieve the new and old pages and the sample size of the initial dataframe is sufficiently big such that collecting data is likely not a good use of resources.

I would recommend that the e-commerce company spend their money on trying to improve their website before trying again. If anything, perhaps do some reason into why the page performed so poorly.